SKETCHES IN THE WEST OF IRELAND.- By Mr. James Mahony

The accounts from the Irish provincial papers continue to detail the unmitigated sufferings of the starving peasantry. Indeed, they are stated to be on the increase, notwithstanding the very great exertion of public bodies and individuals to assuage their pressure.

With the object of ascertaining the accuracy of the frightful statements received from the West, and of placing them in unexaggerated fidelity before our readers, a few days since, we commissioned our Artist, Mr. James Mahoney, of Cork, to visit a seat of extreme suffering, viz., Skibbereen and its vicinity; and we now submit to our readers the graphic results of his journey, accompanied by such descriptive notes as he was enabled to collect whilst sketching the fearful incidents and desolate localities; premising merely, that our Artist must already have been somewhat familiar with such scenes of suffering in his own locality, (Cork), so that he cannot be supposed to have taken an extreme view of the greater misery at Skibbereen.
“I started from Cork, by the mail (says our informant), for Skibbereen and saw little until we came to Clonakilty, where the coach stopped for breakfast; and here, for the first time, the horrors of the poverty became visible, in the vast number of famished poor, who flocked around the coach to beg alms: amongst them was a woman carrying in her arms the corpse of a fine child, and making the most distressing appeal to the passengers for aid to enable her to purchase a coffin and bury her dear little baby. This horrible spectacle induced me to make some inquiry about her, when I learned from the people of the hotel that each day brings dozens of such applicants into the town. (See the Sketch .)
“After leaving Clonakilty, each step that we took westward brought fresh evidence of the truth of the reports of the misery, as we either met a funeral or a coffin at every hundred yards, until we approached the country of the Shepperton Lakes. (See the Sketch .) Here, the distress became more striking, from the decrease of numbers at the funerals, none having more than eight or ten attendants, and many only two or three.

“We next reached Skibbereen, a general view of which I send you from Clover Hill House, the residence of J. Macarthy Downing, Esq.; and, it being then late, I rested until Monday, when, with the valuable aid of Dr. D. Donovan, and his assistant, Mr. Crowley, I witnessed such scenes of misery and privation as I trust it may never be again my lot to look upon. Up to this morning, I, like a large portion, I fear, of the community, looked on the diaries of Dr. Donovan, as published in The Cork Southern Reporter, to be highly-coloured pictures, doubtless, intended for a good and humane purpose; but I can now, with perfect confidence, say that neither pen nor pencil ever could portray the miser and horror, at this moment, to be witnessed in Skibbereen. We first proceeded to Bridgetown, a portion of which is shown in the right hand distance of the sketch; and there I saw the dying, the living, and the dead, lying indiscriminately upon the same floor, without anything between them and the cold earth, save a few miserable rags upon them. To point to any particular house as a proof of this would be a waste of time, as all were in the same state; and, not a single house out of 500 could boast of being free from death and fever, though several could be pointed out with the dead lying close to the living for the space of three or four, even six days, without any effort being made to remove the bodies to a last resting place. 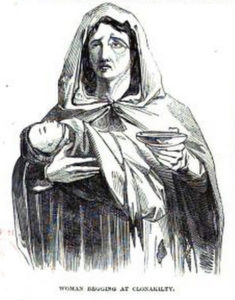 “After leaving this abode of death, we proceeded to High-street, or Old Chapel-lane (See the Sketch ) and there found one house, without door or window, filled with destitute people lying on the bare floor; and one, fine, tall, stout country lad, who had entered some hours previously to find shelter from the piercing cold, lay here dead amongst others likely soon to follow him. The appeals to the feelings and professional skill of my kind attendants here became truly heart-rending; and so distressed Dr. Donovan, that he begged me not to go into the house, and to avoid coming into contact with the people surrounding the doorway.
“We next proceeded to the Chapel-yard, to see the hut, of which Dr. Donovan gives the following graphic account in his diary:–
‘On my return home, I remembered that I had yet a visit to pay; having in the morning received a ticket to see six members of one family, named Barrett, who had been turned out of the cabin in which they lodged, in the neighbourhood of Old Chapel-yard; and who had struggled to this burying-ground, and literally entombed themselves in a small watch-house that was built for the shelter of those who were engaged in guarding against exhumation by the doctors, when more respect was paid to the dead than is at present the case. This shed is exactly seven feet long, by about six in breadth. By the side of the western wall is a long, newly-made grave; by either gable are two of shorter dimensions, which have been recently tenanted; and near the hole that serves as a doorway is the last resting-place of two or three children; in fact, this hut is surrounded by a rampart of human bones, which have accumulated to such a height that the threshold, which was originally on a level with the ground, is now two feet beneath it. In this horrible den, in the midst of a mass of human putrefaction, six individuals, males and females, labouring under most malignant fever, were huddled together, as closely as were the dead in the graves around.

At the time (eleven o’clock at night) that I went to visit these poor sufferers, it was blowing a perfect hurricane, and such groans of roaring wind and rain I never remember to have heard.

I was accompanied by my assistant, Crowley, and we took with us some bread, tea and sugar; on reaching this vault, I thrust my head through the hole of entrance, and had immediately to draw back, so intolerable was the effluvium; and, though rendered callous by a companionship for many years with disease and death, yet I was completely unnerved at the humble seen of suffering and misery that was presented to my view; six fellow creatures were almost buried alive in this filthy sepulcher. When they heard my voice, one called out, ‘Is that the Priest?’ another, ‘Is that the Doctor?’ The mother of the family begged in the most earnest manner that I would have them removed, or else that they would rot together; and they all implored that we would give them drink. Mr. Crowley produced the tea and sugar, but they said it was of no use to them, as they had no fire or place to light it in, and that what they wanted was water ; that they had put a jug under the droppings from the roof, but would not have drink enough for the night. The next day I got the consent of the Poor Law Guardians to have my patients removed from this abode of the dead to the fever hospital, and they are since improving.’

“To complete my melancholy visit to this scene of horror, and to visit every corner of Skibbereen, next morning, accompanied by a Mr. Everett, whose knowledge of the country I found most useful, I started for Ballidichob, and learned upon the road that we should come to a hut or cabin in the parish of Aghadoe, on the property of Mr. Long, where four people had lain dead for six days; and, upon arriving at the hut, the abode of Tim Harrington, we found this to be true; for there lay the four bodies, and a fifth was passing to the same bourne. On hearing our voices, the sinking man made an effort to reach the door, and ask for drink or fire; he fell in the doorway; there, in all probability to die; as the living cannot be prevailed to assist in the interments, for fear of taking the fever.

“We next got to Skull, where, by the attention of Dr. Traill, vicar of the parish (and whose humanity at the present moment is beyond all praise), we witnessed almost indescribable in-door horrors. In the street, however, we had the best opportunity of judging of the condition of the people; for here, from three to five hundred women, with money in their hands, were seeking to buy food; whilst a few of the Government officers doled out Indian meal to them in their turn. One of the women told me she had been standing there since daybreak, seeking to get food for her family at home.
“This food, it appeared, was being doled out in miserable quantities, at ‘famine prices,’ to the neighbouring poor, from a stock lately arrived in a sloop, with a Government steamship to protect its cargo of 50 tons; whilst the population amounts to 27,000; so that you may calculate what were the feelings of the disappointed mass.
“In my way out of the town, I made the accompanying Sketch; and, here, again, I had an opportunity of witnessing the efforts of the Vicar’s family to relieve the afflictions around them; and we met his daughters returning from their work of charity in the poorest portion of the town.

“Having returned to Skibbereen, my next object was to seek out the truth of the following extract from Dr. Donovan’s Diary, as published in the Cork Southern Reporter, of Jan. 26:–
“A man of the name of Leahey died in the parish of Dromdaleague about a fortnight ago; his wife and two children remained in the house until the putrescent exhalations from the body drove them from their companionship with the dead; in a day or two after, some persons in passing the man’s cabin, had their attention attracted by a loud snarling, and on entering, found the gnawed and mangled skeleton of Leahey contended for by hungry dogs.’”
“This, I need not tell you, I looked upon as designed for an effect; and so I started for Dromdaleague, to reach which we had to pass through the miserable parish of Cahera, where, unless something be done for the poor, and that quickly and effectively, the result will be awful.”

Here the report must terminate for the present. Next week we shall complete our painfully interesting series of Illustrations.