Some arrests followed the incursion of the Templepatrick hearts of steel into Belfast. The war between the authorities and the people was in full swing. Everything depended on the juries convicting, for without convictions they were powerless to punish. Juries, however, were not at all anxious to have the odium of convicting; and where they were not hearts of steel themselves they were intimately connected with the movement.

The following extracts from some private letters of the period, quoted with other letters in the N. Whig of 30th March, 1907, give a good view of the proceedings:

The first letter on the subject, written from Belfast to London, bears date 8th July, 1771.

“My last informed you of the measures I had pursued in Carrickfergus, which I flatter myself will prove agreeable. I would fain hope, though there are constant threats and alarms, that the affairs of this county will soon be on a more easy and comfortable footing. Douglas and Rooney, who are both in the proclamation, piopose on Friday next to come in and surrender themselves in order to their standing their trial at the assizes, which are fixed for the 6th September. If the evidences [witnesses] which we have at present will keep up on their examination to but half of what has been sworn before the magistrate we cannot fail of making examples of three or four persons now in gaol, and if Thomas Greg is capable of producing Thompson, who lodged the original examination against the Douglases, I think we will be able to convict the persons who mean to surrender on Friday.”

The assizes duly came off in September but proved abortive, as county Antrim juries could not be got to convict. Here is a further letter from the same person:–

“Carrickfergus, 11th September, 1771.
“I sit down with a heavy heart to tell you that all our endeavours to make an example of the hearts of steel have proved fruitless. We thought ourselves extremely fortunate in having added to the evidences mentioned in my last letter two of some reputation. We set forward for trial three of the most notorious, and against whom we had four evidences whose testimony was given in so clear, perfect, and satisfactory a manner that there remained not in the breast of a single person in court the shadow of a doubt but that they would all be found guilty; indeed, the unhappy delinquents’ own lawyers desired them to prepare to receive sentence of death, whereupon they retired, clothed themselves in black, and returned in expectation of receiving the sentence due to the committal of such heinous enormities, but to the great astonishment of the most crowded audience that was ever assembled in that courthouse the verdict was: “Not guilty.” The judge, chief justice Paterson, rose from his bench with an indignation suitable to the provocation which such an unexpected verdict must have inspired, and said:–

“Gentlemen, I hope God will forgive–you your country never can–for the irreparable injury you have this day done.”

Justice Paterson’s conduct through the whole of this unfortunate business was spirited and uncommonly kind, allowing me to bring the military into court to protect the evidences from insult. We had several trials for different facts, and, though our witnesses in general swore positively, alibies were opposed to them, and not a person found guilty except two of the name of Morrison for trespass and assault.

“The conduct of the jury on the first trial destroyed all our hopes, and made good the fears I always entertained that a jury in this country could not be found to convict a man, no matter how black the crime or how well founded. A new code of laws is concerting for the government of this county. As soon as they are digested and I can procure a copy from sir George Macartney, who assisted on this occasion, and will promote the bill in parliament, I will transmit them to you. Some jealousies were, previous to the trial, entertained of particular persons; therefore it is but common justice to say that Banks, Greg, and Cunningham did use their utmost endeavours to have some examples made.”

The frank partisanship of the judge openly and avowedly a landlords’ man and the law, the landlords’ agent, and the military are characteristic of the administration. If only they could have done without juries the oaths that the informers swore would have hanged all the troublesome people that the land-grabbers wished to hang. Just think of it, this soldier praising the “spirited and uncommonly kind” conduct of the judge for allowing him to overawe justice between man and man by packing the court with a rude soldiery. The “evidences” had been augmented by “two of some reputation”–what of the others? It is doubtful if there was any repute amongst them; anyway, twelve protestant Antrim jurors decided there was not, in spite of an irate bench and the presence of an armed and hostile garrison boiling with indignation at the scarcity of “examples.”

The whole thing was a travesty of justice. Of course “Banks, Greg, and Cunningham did use their utmost endeavours to have some examples made,” to avoid “irreparable injury.” Did it never occur to them as men and as Christians how the whole trouble could have been avoided ? Had greed taken such absolute possession of their souls as to prevent such an insight? Now the very breed of them has gone and the country knows them no more for ever.

In the county Down things were little better. The county cess there seems to have been more a cause of discontent than elsewhere, and there was the same restlessness on the part of the people. The magistrates issued the following proclamation on 6th February, 1771:–

“We, the nobility, magistrates, and gentry of the county of Down, at Downpatrick, assembled on Wednesday, the 6th of February, 1771, to consider of proper measures for preserving the peace in the county of Down, having received undoubted information that several seditious and incendiary papers have been dispersed through different parts of said county, forbidding the several inhabitants to pay the county cess, and the several collectors, high and petty constables to collect the same; and threatening their persons and effects with divers injuries, in case the former shall pay the cess, or the latter shall collect it; and also that threatening letters have been secretly conveyed into the houses of many of the inhabitants of the said county, with a view to extorting money; all of which are in manifest opposition and defiance of the laws of this kingdom and tending to the destruction of the liberty of the subject, and the subversion of all their dearest rights and privileges; and likewise that in some parts of this county these threats have been executed by the burning of houses, corn and hay, a crime that ought to be unknown in any civilized country.

Now we do hereby publish and declare our unanimous resolution to discover and bring to justice, by all means in our power, the authors and publishers of such papers. And we command and require the several collectors, the high and petty constables, to persevere in their duty of collecting the public cess; and in case any of them shall meet with any obstruction therein, we do hereby declare our unanimous determination to give them our aid and personal assistance against all who shall offend.

And whereas we apprehend that many, influenced by threats or the misrepresentations of designing men, have been deluded, and have given countenance and assistance to the execution of their evil purposes; we promise that if any such shall resort to a magistrate, and swear future obedience to the laws, we will use our best endeavours to obtain his majesty’s pardon for them.” 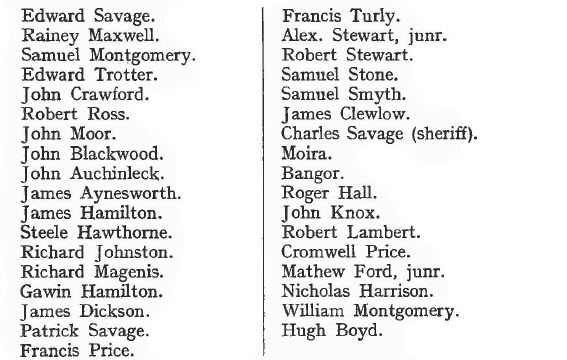 The lord lieutenant, in his address to parliament in this year (1771), says:–
“The illegal associations and daring outrages committed in different parts of the kingdom, particularly in the north, deserve your most serious attention. They are “destructive of commerce and disgraceful to liberty.”

And in their reply the commons say:–

“The illegal associations entered into and the audacious outrages committed in different counties of this kingdom, and particularly in some counties in the north, give us the utmost concern, and nothing shall be wanting on our parts to prevent for the future those atrocious violations of the public peace and tranquillity.”
” News Letter, 15th October, 1771.”

The commons appointed a committee to enquire into the whole matter and into the means taken for quelling disturbances. In the N. L. of 3rd January, 1772, we find the committee’s report.

“Lord Dunluce reported from the committee appointed to inquire into the causes of the late tumultuous risings in the counties of Antrim and Down and into the means that were used to suppress them; and who were instructed to consider what may be the most effectual means to prevent such risings for the time to come and to bring the persons concerned therein to condign punishment, and to whom the seven last resolutions which the committee had directed to report to the house, which he read in his place, and afterwards delivered in at the table, where the same were read and are as follows:–
1. Resolved:– That it is the opinion of this committee that the beforementioned spirit so universally prevailing in said counties may have such an influence upon the minds of jurors as to deter them from convicting such offenders lest they should thereby endanger their lives and properties.
Resolved:– That it is the opinion of this committee that the best expedient to counteract such expectations of impunity and to give an immediate and thorough check to said outrageous proceedings will be by a law enacting that all persons indicted for offences of such a nature as the said hearts of steel have been guilty of shall, for a limited time, be tried by juries of such other county or counties as the grand jury finding the bills of indictment shall require.”

The difficulty of getting witnesses to testify and juries to convict was resulting in verdicts of not guilty in a great many cases. The authorities looked on with alarm to find man after man discharged. Accordingly at the end of February:

“Mr. O’Neill presented to the house, according to order, heads for a bill for the more effectually punishing the wicked and disorderly persons who shall commit violences and do injuries to the persons or properties of any of his majesty’s subjects in the counties of Antrim and Down, or either of them, and for the more sure and speedy bringing such offenders to justice, which was received, read, and committed.”

In the second week in March the bill to change the venues of trials was passed by parliament and sent by express to London to be assented before the spring assizes should open. The authorities prepared for vigorous action. The N. L. of 20th March reports:

“Dublin, 17th March. Yesterday morning 5 companies of foot marched out of town for the north to join the main body in quelling the hearts of steel.”
To quell the hearts of steel was now no easy matter. They were greatly exasperated, and the number of retaliations committed had swelled to enormous proportions, as can be seen by the appendices, pages 133 and 154.