GENERAL UPHEAVAL. THE EXODUS OF ULSTER. THE PLANTATION OF AMERICA.

AT the summer assizes held in and for the county Antrim, at Carrickfergus, ist August, 1765, baron Mountney, in the crown court, found on his desk a petition from the united parishes of Kilwaughter, Carncastle, and Lame, attacking William Agnew, a magistrate, for his harsh enforcing com- pliance (with a part only) of the statutable six days’labour; as also another petition, manifestly as tending to sedition, and which had been subsequently and in like manner addressed and laid upon the said desk in the words following, viz.

“The petition of the united parishes of Carncastle, Kilwaughter, together with the parish of Larne. Humbly sheweth that your lordship’s petitioners set forth our distressed condition on account of excessive labour at the county road, which is demanded of your petitioners by William Agnew, and your lordship entirely disregarded our petition, and if no means be thought of to redress our grievances, we must have recourse to unlawful resentment, which we pray your lordship to prevent by using a caution in our behalf, and your petitioners will, as in duty bound, ever pray.”

The high sheriff and grand jury of the county thereupon testify to the irreproachable character of William Agnew, their dislike and abhorrence of so audacious a menace; will enforce due obedience to the laws in general, and particularly the laws relative to the six days’ labour; offer 20 guineas for the conviction of the writer or publisher of the petitions. 3rd August, 1765.

William Agnew signed this proclamation. The petition was humble and properly presented, yet the grand jury tried to terrorise the petitioners by their language “so audacious a menace” and their reward of twenty guineas.

At the Monaghan assizes, 1765, there were many sentences for deeds committed by the people. On gth April three persons were capitally convicted for burning tithe corn, and two sentenced to transportation for life for the same offence.

At the Antrim assizes there had also been many capital convictions, but to the great dismay of the authorities some of them, as well as other prisoners, escaped from Carrickfergus gaol. The News Letter gives the following:

“Wednesday last (19th December, 1765), between the hours of three and four in the evening, when the keeper of his majesty’s gaol for the county of Antrim, at Carrickfergus, was removing some of the prisoners (all charged with capital offences, having previously got their bolts sawn off) rushed on the gaoler, knocked him down, cut him desperately in several places on the head and body, so that his life is in imminent danger, took a pair of pistols from him and made escape together by the north gate, headed by William Forsyth, one of their body, having at the end of the town, as it is said, received more firearms from persons waiting for them.

“It is hoped that so dangerous a set of villains will be vigilantly enquired after, as it may be expected the service to be done to the public in apprehending any of them will be amply rewarded by the county. And masters of ships are particularly requested to have a watchful eye on any sus- pected persons offering to take their passage with them.”

The masters of ships appealed to were not likely, however, to trouble enquiring into the history of intending emigrants. The crowds wanting to take passage to America were too great to allow of much scrutiny.

Passengers from the north of Ireland in the snow Buchanan arrived safe, and will recommend their friends who have an inclination to come to this country (where freedom reigns) to come by her.
Dated New York, 24 August, 1765.”

The passage took eight weeks and six days.
In spite, however, of the emigration, the population of Ireland was going up steadily. In 1695 it was estimated at a little over one million. Seventy years later we find “By the latest and most exact calculations that have been made the inhabitants of Ireland amount to above two millions and a half.” The rate of increase became much greater in Ireland after 1782, owing to the stimulus given to native industry by the volunteer movement and Grattan’s parliament. The emigration, however, about this time was very great, as the following table, taken from the News Letter, clearly proves:

“1771-2. The astonishing extent to which emigration from the province of Ulster to America was now carried may be estimated from the following statement published in the Belfast News Letter in 1773 ‘The number of ships and their tonnage that sailed with passengers from the north of Ireland for north America in the last two years, taken from the advertisements published in this paper, viz.:– 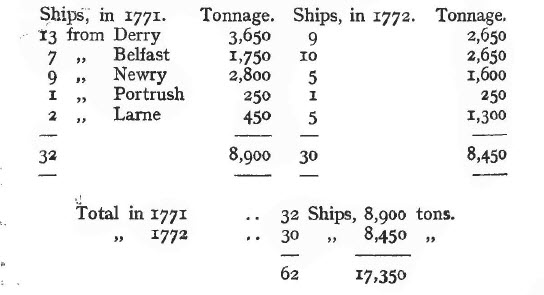 N.B. It may be supposed on a moderate computation that the number of passengers were equal to the tons.

“The greatest part of these emigrants paid their passage, which, at £3 l0s. each, amounted to £60,725, most of them people employed in the linen manufacture, or farmers, and of some property, which they turned into money and carried with them. In evidence of this it was computed that one ship last year had no less than £4,000 in specie on board. Their removal is sensibly felt in this country. This prevalent humour of industrious protestants withdrawing from this once flourishing corner of the kingdom seems to be increasing, and it is thought the number will be considerably larger this year than ever.”

“The north of Ireland has been occasionally used to emigration, for which the American settlements have been much beholden; but, till now, it was chiefly the very meanest of the people that went off, mostly in the station of indented servants, and such as had become obnoxious to their mother country. In short, it is computed from many concurrent circumstances that the north of Ireland has, in the last five or six years, been drained of one-fourth of its trading cash, and the like proportion of the manufacturing people. Where the evil will end remains only in the womb of time to determine.”

“1773. The number of ships and their tonnage that sailed with passengers from the north of Ireland for America, in the year 1773, taken from the advertisements:–