WHOLESALE CLEARANCE OF ESTATES. THE VOICE OF
PRESBYTERY.

Thousands of acres of the best land we e cleared of people. Hundreds of farms were constantly advertised to let or to be sold (See Appendix I.). Here is one advertisement taken from the N. L., 3rd January, 1769:
“To be let for 21 years, or such term as shall be agreed on, from the ist of May, 1769, the following lands in the county of Antrim, being part of the estate of Clotworthy Upton, viz.:– 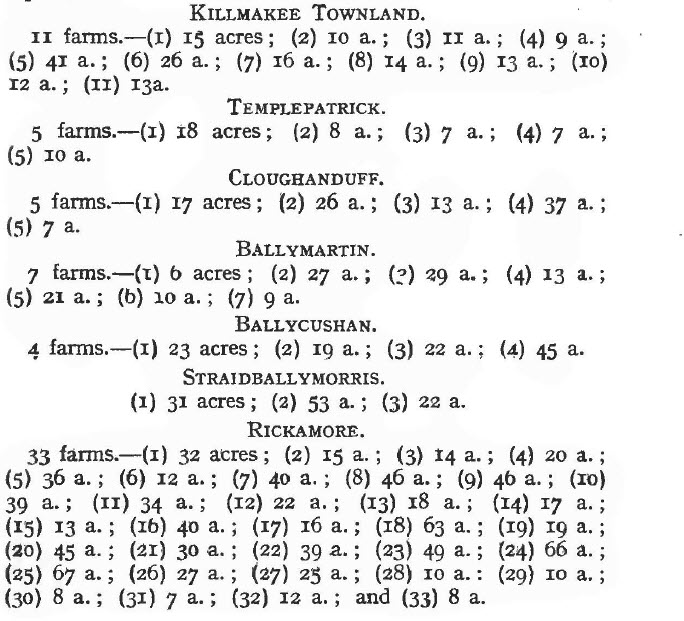 “The above acres’ are plantation measure.
The lands lie within 3 miles of Belfast, 4 from Antrim, and 7 from Lisburn, all good market towns.
Proposals for the above lands to be sent to Clotworthy Upton, sealed up and under cover to Edward Southwell, Spring Gardens, London.”
“Dated 11th November, 1768.”

These lands were all on the Upton or Templepatrick estate, and show what a wide clearance had been made, what devastation effected, what happy families cast adrift on the world. What numbers of good gun men, fathers and sons, had been evicted from Templepatrick farms, had been sent to fill the regiments of the new republic of the west, when every shot fired was against English rule and for the new commonwealth, and in honour of the old land from whose sod they had been driven so relentlessly.
And now, in this year of grace 1910, as we walk under the limes at Templepatrick, and look upon the empty towers of Castle Upton, with its “mortgagee in possession,” and think of its “noble owner” earning his bread by the sweat of his brow in London, with the “tenants” that are owners and occupiers of the soil they till, we needs must pause and think of the evolution of a few generations. Now none so poor as do him reverence, and why ? With right dealing and fair treatment the “lord” of Templepatrick might have been “lord” still, had he recognised the fundamental principle that property has its duties as well as its rights, and that he was never “lord” of all he surveyed. There were others as good and as well bred as ever he was who tilled the soil, and they, too, had their rights. We might push the argument further, but we won’t; we will leave it at that. The hearts of steel did fcot struggle in vain “ever defeated, yet undefeated.”

The presbyterian church, speaking through the various presbyteries, strove to prevent the breaking of the civil law by the people, but with little effect. The presbyteries of Tyrone, Monaghan, Armagh, Antrim, Ballymena, Moira, Newry, Belfast and Derry all addressed their members. We give some quotations from these documents. They all freely admit that their people were actively engaged in this land war and in every phase of it. (See Appendix III.).

“The address of the Bangor presbytery:–
To our sorrow we find that in a few places in our bounds some among you have been charged with the guilt of the most shocking outrages and licentious injustice in uttering threats and publishing papers of the most dangerous and illegal tendency, in burning houses and with unfeeling barbarity destroying the support of man and beast, an outrage dreadful at all times, but marked with every circumstance of savage cruelty in the present season of scarcity and dearth.”
“Dated 6th February, 1772.”

The address of the presbytery of Templepatrick, forwarded by the lord lieutenant, lord Townshend, to London, had the following passage underlined by himself:–
“Now though we, the members of the presbytery, cannot but lament the heavy oppression that too many are under from the excessive price of land and the unfriendly practices of many, who contribute to the oppression by proposing for their neighbour’s possessions, by which means they are too often deprived of the improvements made by their forefathers and themselves, which may be the occasion of the present illegal measure, yet we are convinced that violence defeats its own ends, etc.”
It was too late, however, for exhortation to quiet the people. Redress of their grievances they were determined to have at all costs, and only redress could stop the agitation.
They knew their rights and were determined to have them. They felt their demands to be moderate, and the presbyterian clergy, even when they exhorted the people to be patient, knew them to be in the right. Some of the hearts of steel set forth their grievances in a petition which is here printed.

“Petition of those persons known by the name of hearts of steel:
That we are all protestants and protestant dissenters and bear unfeigned loyalty to his present majesty and the Hanoverian succession. That we, who are all groaning under oppression and have no other possible way of redress, are forced to join ourselves together to resist. By oversetting our lands we are reduced to poverty and distress, and by our rising we mean no more but to have our lands, that we could live thereon, and procure necessaries of life for ourselves and our starving families. That some of us refusing to pay the extravagant rent to our landlords have been turned out and our lands given to others who will promise any rent. That we are sorely aggrieved with the county cesses, which, though heavy in themselves, are rendered more so by being applied to, private purposes. Yet, lest it should be said that by refusing to pay the cess we fly in the face of the law, which we do not intend, we will pay the present cess; and we hope the gentlemen of the county of Down will, in future, have pity on the distressed inhabitants. That it is not wanton folly that prompts us to be hearts of steel, but the weight of oppression. Were the cause removed the effects would cease, and our landlords, as heretofore, live in the affection of their tenants. May it please you to enquire into the cause of our grievances and lend your hand to eschew the evils which seem to threaten the protestants of the north; and let not suggestions of men partial to their own cause inflame your wrath against innocent and injured persons who are far removed from the ear of government and other possible means of redress. Oh that the cry of the oppressed might reach the throne of Britain ! Our mild and gracious sovereign, from his well known goodness, would extend his care to the suffering protestants in the north of this kingdom.
“BY THE HEARTS OF STEEL.”

The position taken up here by the people is quite definite. They were “groaning under oppression,” and “are forced to join themselves together to resist.” “We mean no more but to have our lands,” not the landlords’ lands but their own. “Weight of oppression” caused them to be hearts of steel. “not wanton folly.” Of course some of the phrases in such a petition were what is called politic, but the men of Antrim and Down knew right well their powers of resistance to oppression, and the chances of any likelihood of redress from any alien source, so they kept their powder dry.