THE SLAUGHTER OF THE INNOCENTS

Cattle houghing was particularly common and caused a great outcry on the part of the undertakers and authorities. Very large rewards were offered. This dreadful practice was only resorted to on occasions when tenants had been evicted from their lands and the same were given over to graziers or grazed by the Belfast middlemen.

The following advertisements are typical of many others at the time:–

“Whereas on the night of the 17th day of August, instant [1770], twenty-three head of black cattle grazing on the lands of Lisnalinchy, in the parish of Ballylinny, in the county of Antrim, the property of Thomas Greg of Belfast, merchant, were maliciously and feloniously houghed, maimed, and wounded by some wicked persons unknown. Now we whose names are hereunto subscribed, being justly incensed at such a barbarous and inhuman action, do hereby promise to pay the several sums annexed to our names respectively, as a reward for discovering and prosecuting to conviction the person or persons of said horrid crime, provided such discovery and conviction be within nine months from the date hereof.
Given this 22nd day of August, 1770.” 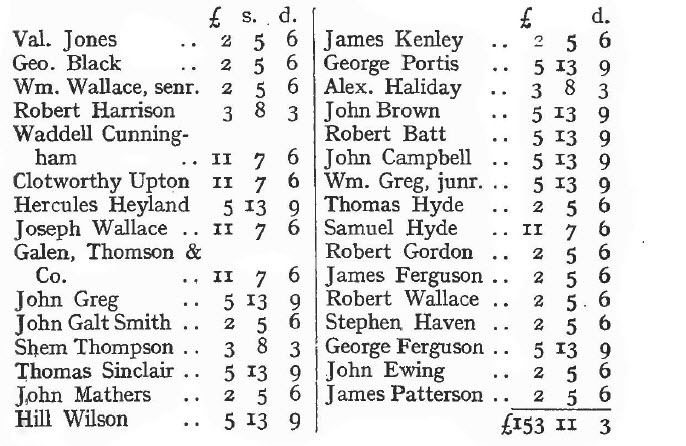 “We, the grand jury of the county of Antrim, at summer assizes, 1770, do promise to pay the several sums, annexedto our names, for apprehending and prosecuting to conviction
the person or persons concerned in killing and stabbing the above-mentioned cattle. 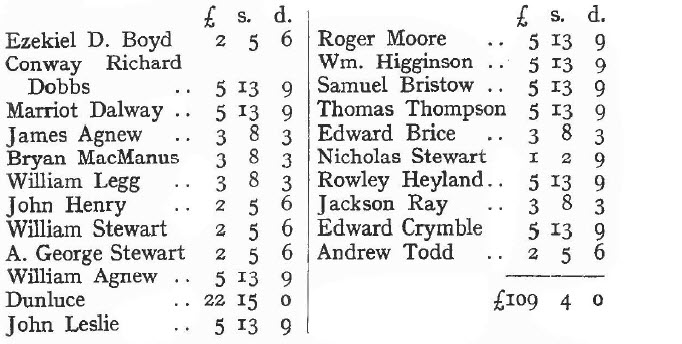 “Whereas on the night of the seventeenth day of August instant, some wicked persons did maliciously, wilfully, and feloniously hough, maim, stab and wound seven bullocks, fifteen cows, and one bull, the property of Thomas Greg of Belfast, merchant, which were grazing on the lands of Lisnalinchy, in the parish of Carnmony, in the county of Antrim. Now the right honourable Arthur, earl of Donegall, in order to bring to exemplary punishment the persons guilty of so horrid and atrocious a crime, hereby promises to pay the sum of one hundred pounds sterling to any person or persons who will discover and prosecute to conviction, within nine months from the date hereof, any one or more of the persons guilty of the said barbarous and inhuman act, to be paid immediately on conviction, and his lordship will also defray all the costs of such prosecution.”

“Some persons having, on the night of the 17th instant, killed, stabbed, and maimed seven bullocks, fifteen cow?, and one bull, my property, on the land of Lisnalinchy and barony of Belfast, I do offer a reward of forty pounds for the discovering and prosecuting to conviction one or more of the said persons guilty of said felony, any time within nine months from the date hereof, and to apply for his majesty’s pardon for any one of the persons concerned who will discover and prosecute to conviction one or more of his accomplices in killing, stabbing, and maiming said cattle.”
Belfast, 29th August, 1770.
“THOMAS GREG.”

The issue was here clearly set: the landlord Donegall, his middleman, the grand jury and “gentlemen” of Belfast versus the people of Ballylinney, Ballynure, Carnmoney, and Templepatrick. Over £400 and a free pardon the price. The whole countryside knew of it, and who the actors were, yet never a whisper was breathed that might bring them “to exemplary punishment.” Here was war of a sort, the only war practicable, and horrid cruel it was.

The innocent cattle suffered physically, and Greg only through his pocket, yet human blood would flow if the advertisers had their way, and all for what–that Donegall might have a few more pounds to minister to his debauchery and set a whole nation in turmoil, and Greg might run his chance of ill-gotten profit. Well might viceroy Townshend curse Donegall, well might England’s king despise him; but king or viceroy had no influence over this “noble” man.